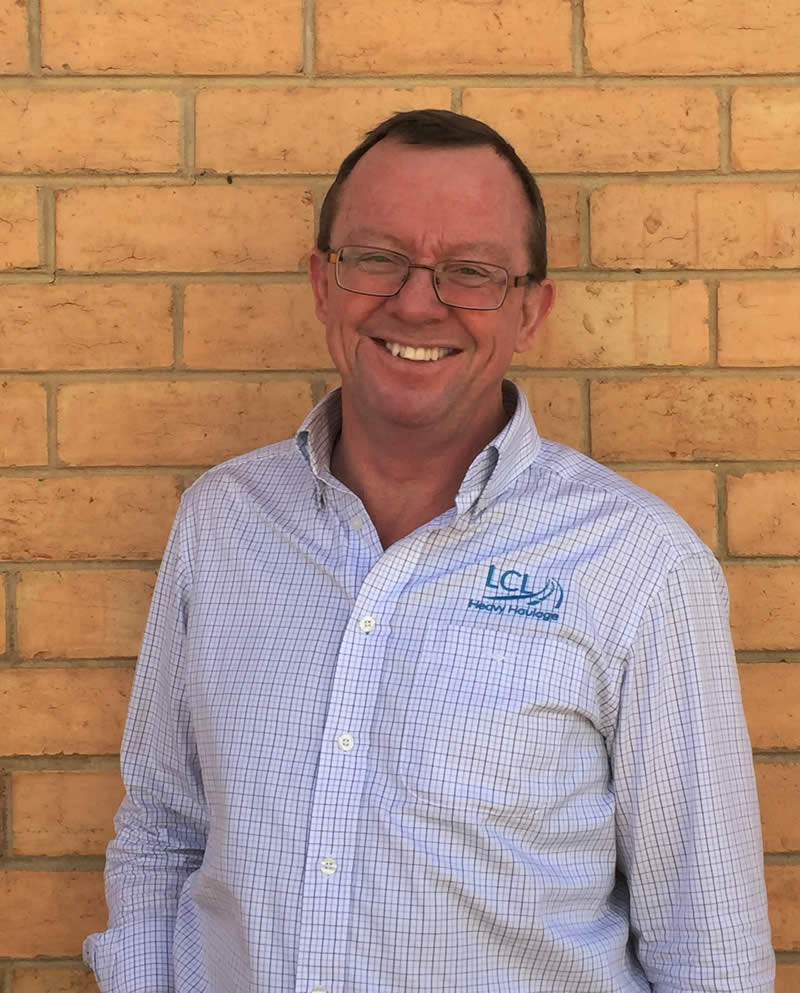 back to about us

Peter started with one prime mover and a hired trailer and has overseen the development of his business which now has a diverse client base which features many national organisations in the heavy equipment industries including Downer, Cavpower and Coates.

Peter’s aspiration to be the ‘best’ includes the equipment LCL uses, such as having the right chains and the right load binders and utilising the most appropriate trailers for specific tasks. All of LCL’s floats are modern self-widening trailers from Drake.

“Most of our trailers are steerable so we’re not wrecking the roads and destroying our tyres,” says Peter.

Peter has a long association with the Volvo brand and the fleet currently consists of ten Volvo prime movers. The nature of heavy haulage means that drivers are often away from their home for extended periods and the Volvo cabs provide the comfort both for driving and resting and are a major factor in ensuring the drivers feel fresh after a shift and also after a break.

“As soon as I get in a Volvo straightway I feel at home,” he says. “It’s smooth, quiet, the driving position is perfect and I can see everything!”

He also favours Volvo because of the trucks’ proprietary driveline components which are engineered to work together. During the past couple of years Peter has put a lot of effort into restoring an original Volvo FH 660 and its XXL cab, with the intention of the truck ultimately being displayed at the National Road Transport of Fame in Alice Springs. Peter wanted to keep the original engine as he considers that to be the ‘heart and soul’ of the truck so it was reconditioned by the Volvo specialists at South Central Trucks. A new gearbox was fitted along with numerous other components.

Asked why he put so much effort and dollars into an 11 year old truck that in ordinary circumstances would have been replaced and Peter’s reply is heartfelt.

“I guess I have an emotional attachment to it. That truck was built with love and age was catching up with it,” he says. “During its working life it travelled all around Australia and the very few times that it ever broke down were at least close to home – once even out front of the dealership!”

Peter was able to source the components he required for the restoration including new dash panels so the interior as well as the exterior looks brand new.

The latest Volvo FH XXL Globetrotter was officially released at this year’s Brisbane Truck Show and Peter has wasted no time in ordering one of the trucks with its super-sized XXL cab and it is likely to be the first of the new XXL models to be delivered, in a way completing the circle with the restored Volvo.

The OSOM (over size, over mass) loads that LCL specialise in require a high level of expertise as well as the right equipment. LCL has several drivers who have been with the company for 17 and 18 years and General Manager Grant Westbury is the OSOM representative on the Board of the South Australian Road Transport Association (SARTA). The nature of much of LCL’s activities involves moving heavy and sometimes awkward loads on dirt roads so the drivers need to be adept at maintaining traction even if electronically operated traction control is fitted to the trucks.

LCL uses the Allotrac system to provide end-to-end tracking of loaded components and to maximise the efficiency of the company’s booking system. One feature is that even if drivers are in remote locations it is still necessary for them to perform all of their pre-start checks before they can access the Allotrac system.

OSOM transport requires lots of paperwork and while Peter sees ongoing improvements in the NHVR process, due to providing Australia wide services LCL has to navigate through the complications of operating under not only the ‘nationalised’ regulations but also under the often different rules of the Northern Territory and Western Australian jurisdictions. He’d like to see more reciprocal recognition of cross-border accreditation.

“If we’ve gone down a road previously with the right permits why can’t we repeat the exercise without going through the permit process if we know we are again legal because a similar load using the same vehicle configuration has been approved before?” Peter asks.

Peter and Grant welcome the current review of the Heavy Vehicle National Law and look forward to some of the jurisdictional anomalies being addressed such as the requirement in Queensland for vehicles wider than 2.5 metres being restricted to 90 km/h while other states allow 100 km/h for the same configuration.

Similar to many in the industry, Peter regards the current fatigue regulations as unwieldy and falling short of their intentions.

“I think the Northern Territory and Western Australia have got a better system by a long shot,” he says. “I can understand use of log books in eastern states but it should stop in the more remote areas such as Central Queensland. A responsible driver should be able to manage their own fatigue. I could drive for 16 hours and still feel good, yet on other days drive for only three hours and feel absolutely exhausted but still legal to continue. The 24 hour breaks can impact our type of operation and have a driver forced to stop out in the ‘never-never’ where there are no facilities.”

The over dimension combinations also often experience difficulty accessing suitable rest areas and not just because of the increasing problem of caravans taking up space meant for truck drivers to be resting. Some designated areas are so small that they have no space available with just two B-doubles already occupying them.

“The Northern Territory has best parking bays in the country as far as I’m concerned. Many may not have facilities but they are bitumen and they are big,” says Peter. “Most have slip lanes to access them and then to return to the highway which improves the situation for both the big loads and other passing drivers.”

In an industry sector that is as competitive as any and has seen some high profile operators spectacularly fail in recent years Peter Taylor has a good understanding as to why LCL Heavy Haulage has not just survived but steadily grown.

“I started out working for a company in Adelaide and I learned how not to run a business. After I created my own operation 21 years ago many of my early customers really looked after me and I’m a person who remains loyal to people. I’ve still got a lot of those customers who supported me when I first started my business,” he recalls. “My motto in life is treat people how you want to be treated yourself. Even with people you don’t like. Some people may seem really arrogant but at the end of the day that’s part of their make-up.”